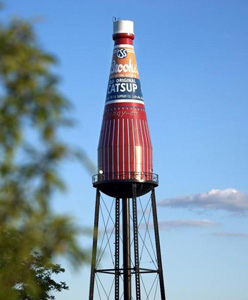 Many people ask about Sev-Rend’s location – and it is usually easiest to tell our friends and clients that we are in the ‘St. Louis Area’. This usually puzzles many because our location is just across the Mississippi River from St. Louis in Collinsville, IL. We wanted to highlight the town of Collinsville so our readers learn a little more about the city.
Collinsville is the self-proclaimed “Horseradish Capital of the World”, and sponsors an annual Horseradish Festival. The area is said to produce 85% of the world’s horseradish, of such high quality that Germany and China (key users of the herb) import it for gourmet use. The Horseradish Festival is held annually during the first weekend in June. Collinsville is also the site of the Brooks Catsup Bottle Water Tower, which is claimed to be “the world’s largest catsup bottle.” It is a 170-foot-tall water tower in the shape of a ketchup bottle, which is listed on the National Register of Historic Places.
Another neat tidbit of Collinsville is The Cahokia Mounds State Historic Site is located within it’s city limits. The largest Pre-Columbian settlement north of Mexico, it was developed by the Mississippian culture. At its peak about 1200 CE, Cahokia had a population of 20,000-30,000, more than any city in the present-day United States until after 1800.

Collinsville is also home to Sev-Rend’s headquarters and production facility. Built in 2008 – Sev-Rend’s state-of-the-art facility is one of the only manufacturing companies in the Collinsville city limits. Sev-Rend manufactures all of the packaging items you all see in the grocery stores, such as the film, netting, pouches, and tags to name a few.

The Sev-Rend facility has a large foot print and was designed with the anticipation for growth. It also touts many sustainable efforts with its design and setup for its production processes. In operations in 2019, Sev-Rend recycled 46 tons of potential waste products from its modern manufacturing facility in Collinsville, IL. This was diverted from landfills because of the effort. Of the total volume, 36 tons were sent from the plant to an external recycling facility. And ten tons of waste materials were reformed to be used in Sev-Rend packaging materials.

In another effort to reduce waste, Sev-Rend utilizes high-efficiency lighting both indoors and on the exterior of its massive plant. The firm reduced its kilo-wattage by 19 percent in 2019. We also pride ourselves on utilizing water based inks within its printing process, which is considered to be a friendly alternative to soluble based inks which have high VOC emissions and are more hazardous for the environment.

This website uses cookies to improve your experience while you navigate through the website. Out of these cookies, the cookies that are categorized as necessary are stored on your browser as they are as essential for the working of basic functionalities of the website. We also use third-party cookies that help us analyze and understand how you use this website. These cookies will be stored in your browser only with your consent. You also have the option to opt-out of these cookies. But opting out of some of these cookies may have an effect on your browsing experience.
Necessary Always Enabled
Necessary cookies are absolutely essential for the website to function properly. This category only includes cookies that ensures basic functionalities and security features of the website. These cookies do not store any personal information.
Non-necessary
Any cookies that may not be particularly necessary for the website to function and is used specifically to collect user personal data via analytics, ads, other embedded contents are termed as non-necessary cookies. It is mandatory to procure user consent prior to running these cookies on your website.
SAVE & ACCEPT